The Younger Sun Reviews: The Secrets of Magnolia Moon

Claire LOVED The Secrets Of Magnolia Moon by Edwina Wyatt!
It’s our chapter book of the month for January.

Magnolia Moon was born on a hill in a very great hurry. It was the moon that kissed her first. It put the dimple in her cheek and the coils in her hair. But that is a secret. Her mother is sure they come from her.

Nine-year-old Magnolia Moon has a wonderful friendship with the moon. The moon, like her, is bigger than she sometimes feels. And the moon is also great at keeping secrets. Just like Magnolia. It’s not always easy and sometimes it can take a while to decide how best to keep a secret. Meanwhile, there are ordinary everyday wonderfuls to navigate – hopes and dreams and bravery. The Secrets of Magnolia Moon is a hardback chapter book with line illustrations scattered throughout.

Magnolia Moon is a gentle watcher and deep thinker. She is a good friend and a wonderful dreamer. The Secrets of Magnolia Moon is a celebration of the small events of every day that each child will encounter and has to respond to. It’s about how differently people respond to the same situation and how it is possible to accommodate multiple viewpoints. Magnolia’s gentleness and insight offer the quiet child a champion, and the more rambunctious reader a time to travel more slowly. Perfect for newly independent readers ready for a chapter book, or as a read-to for younger children. 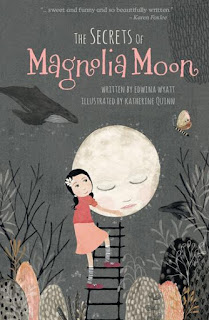 Magnolia is nine and a half and her life is changing. Her best friend has moved away. Mum is having a baby. Magnolia has moved up to grade four with a new teacher and new friends.  Magnolia is a very special girl. She is positive, forthright and honest. She is also a problem solver, which I love. She thinks up practical solutions for any problems that come her way.

Here is an example. She visits her friend Imogen May for a sleepover. Imogen explains there is a ghost in the new house. Magnolia wakes up in the middle of the night and she hears the ghost. She leaves Imogen May sleeping and heads downstairs.  The ghost is in fact Ernest, Imogen May’s brother. He is frightened of the noises made by the toilet when it is flushed. Magnolia takes charge. She leads Ernest up to confront the toilet. “I am going to flush you now, and you are going to get on with it and not make a fuss … And you are to stay there, and you are not, I repeat not, to follow us down the hall.”

I love the way Magnolia makes sense of time. “Time was tricky like that. It could be long and short all at once. And it was always going backwards and forwards getting stuck between yesterday and tomorrow.”

If you were using this book with a class you could make a lifetime book with a different example on each page.

I also love the tiny observations of life:

“Magnolia turned her pillow to the cool side.”
“There were piles of washing all over the floor, spilling out of the basket in a tsunami of towels and sheets and tiny singlets.”
Magnolia’s new friend Casper Sloan makes his own lunch each day. He uses an alphabet system. On the w day Magnolia guesses it will be “wontons with wasabi, then waffles with white chocolate and watermelon.” No he is having “watercress on white bread, walnut cake and wheatgrass juice.”

And I love the delightful names:

I think you can tell I really loved this little gem of a story. This is a quiet book which gently observes daily life for Magnolia allowing us to know her secrets.

I first read The Secrets of Magnolia Moon in June this year. Walker Book Australia kindly gave each of the people attending an advance copy. I am never sure how long I need to wait to talk about a new book so I put it to one side. The Secrets of Magnolia Moon was published in November and it is receiving so many positive comments.  Megan Daley read this book to her little girl and they both loved it.

Katherine Quinn is an illustrator from New Zealand.

I will make the prediction that The Secrets of Magnolia Moon will be a notable title for our CBCA awards in 2020 and from there a short listed title in the Younger Reader category.

I loved the previous picture book by Edwina Wyatt – In the Evening. I would pair The secrets of Magnolia Moon with Where Dani goes Happy follows.

The Secrets of Magnolia Moon is a whimsical and gentle portrayal of friendship and problem solving, with each page to be savoured. And I think young readers could do with more of that. Kids Book Review 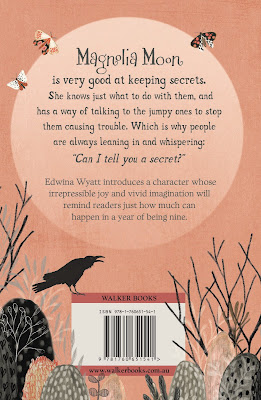 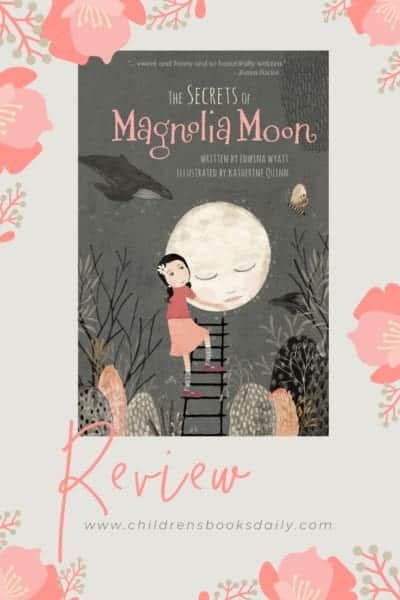 For those who love picture books, Edwina Wyatt will likely already be known to you as the award winning author of titles such as  ‘Together Always’, ‘Fox and Bird’, ‘In the Evening’ and ‘Ponk!’ and now she has made her junior fiction debut with the truly gorgeous, ‘The Secrets of Magnolia Moon’

Click on cover image or title links  to buy from Booktopia when shopping online in Australia to #supportaustralian. Purchase in store from your local independent bookstore where possible #supportlocal. 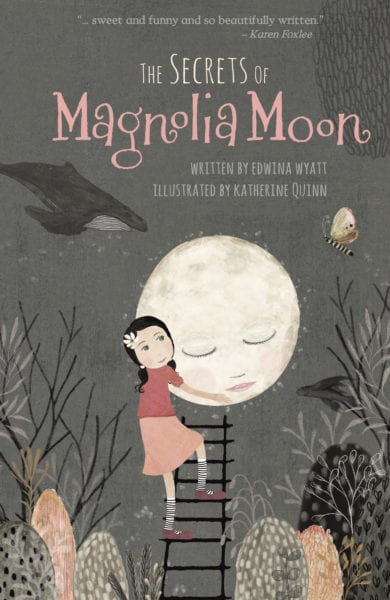 Magnolia Moon is nine years old, likes Greek mythology, her cat Atlas, her best friend Imogen May (who understands the importance of questions like, “If you could be one fruit, any fruit, what would you be?”), wishing trees, and speaking crows. She knows instinctively that buffadillos are armadillos crossed with buffalos and believes there are walramingos living in her garden. Magnolia Moon wakes each day with thoughts that sprout like bean shoots or hatch from her head like a spring chicken (the spring chicken thought then staggered and sneezed as actually Magnolia was unwell that morning). She’s also the kind of person who can be entrusted with a great many secrets.

ChickPea (8) and I enjoyed this one as a read aloud and I had to make her pinky promise she would not read ahead after I turned the lights out as ‘The Secrets of Magnolia Moon’ was a book that I wanted to savour together. When I find the perfect bedtime read aloud (and this occurs less frequently than you might expect), I really enjoy each word, fall into the storytelling and try to commit to memory that feeling of being squished beside an adored small person. Do not for a second think that all nights are like this in the Daley Household, they are far from this image of instagram worthy perfection, but bedtime books like ‘The Secrets of Magnolia Moon’ help create the sparkly memories to get you through the tough times!

“What have you got?” said Magnolia Moon, peering hungrily into Casper Sloan’s brown paper bag. It was only Tuesday, but Magnolia felt hungry enough for Wednesday’s and Thursday’s lunch too. Plus a hot chocolate.

Each chapter in this novel captures a snippet in Magnolia’s year of being nine and each is a nicely contained story which, as you read, start to form an overall narrative which chronicles a year of big changes for Magnolia. From her best friend moving to the birth of her little brother Finnegan, Magnolia navigates every challenge and secret that comes her way with the kind of authenticity and innocence that comes from being nine years wise.

Wyatt’s writing is sophisticated and elegant with a nice splash of quirkiness and gentle humour which made ChickPea chuckle every few pages. Illustrator Katherine Quinn is an established artist from New Zealand and Magnolia Moon is her first foray into the world of children’s literature. I’m sure Quinn is going to find herself right at home in literary land; in good news, she seems to have a few more bookish projects on the go already. Her whimsical illustrations are the perfect fit for Wyatt’s gentle words and the carefully considered book design allows space for both the illustrations and the text to take turns on centre stage but also support and extend one another.

Magnolia loved the busy hum of the town square in the morning, like an orchestra getting ready to perform. Everybody was tuning up, looking for the right note to play.

‘The Secrets of Magnolia Moon’ is for readers who have enjoyed stories such as ‘The Cleo Stories’ (slightly younger audience), ‘Violet Mackerel’ and  ‘Ruby Red Shoes’.  It also has the same magic that is found in the  ‘Kingdom of Silk’ series by Glenda Millard, which I will not let ChickPea read until she is exactly 9.5 (or Almost Ten as Magnolia Moon might say), the perfect age to inhale this exquisite series in my opinion. I feel that Magnolia Moon and Tishkin Silk (from Millard’s series) would be dear friends if they were to meet inside the pages of the book. I have a lovely daydream sometimes that the characters in my favourite books come out to play in the school library each night…

Pick up your pencils and brushes Edwina Wyatt and Katherine Quinn, we need another volume of Magnolia Moon stories. 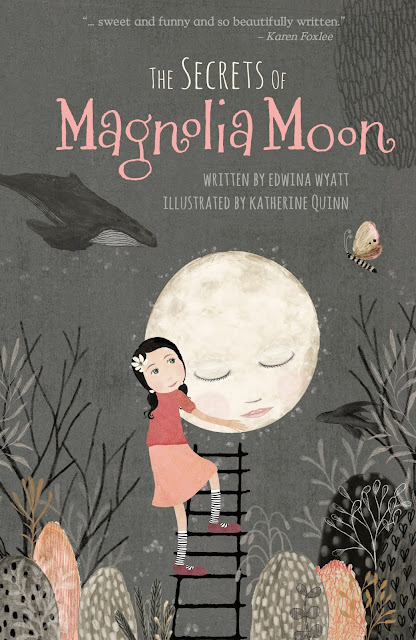 As soon as I heard the title of this debut junior fiction novel, from award-winning picture book author Edwina Wyatt, I was hooked. Then came the exquisite cover, from New Zealand illustrator Katherine Quinn. And, from the very first page, I was enchanted.

Magnolia Moon is a quirky nine-year-old girl, with a love of Greek mythology, her best friend, Imogen Mae, and the moon.

She is the kind of girl who would be a grape, if she were a fruit — because you would never be lonely, sitting there in a bunch — and has a wonderful way of measuring time — There’s a whole year to go, which is a lifetime if you are a giant jellyfish.

But, best of all, she is excellent at keeping secrets. In fact, each chapter reveals a new secret that Magnolia is keeping and, together, they form a beautiful vignette; a snapshot of a year in the life of Magnolia Moon.

From her best friend moving away, to Daddy Moon not wanting to celebrate his birthday, and the birth of her baby brother, Finnegan, Magnolia deals with each secret in her sweet, funny and inventive way.

Edwina Wyatt’s prose is lyrical and heartfelt, with a glorious use of imagery. And Katherine Quinn has captured the fanciful nature of Magnolia Moon with warmth and joy.

This is not a fast-paced read, brimming with dramatic tension. Calling to mind the writing of Astrid Lindgren and Kate DiCamillo, The Secrets of Magnolia Moon is a whimsical and gentle portrayal of friendship and problem solving, with each page to be savoured. And I think young readers could do with more of that.